In preparation for the autumn and winter (hard to imagine during the amazing run of weather we’ve had this summer), we decided to make a few adjustments to the Adventure School layout; nothing major but hopefully the tweaks will make a difference. 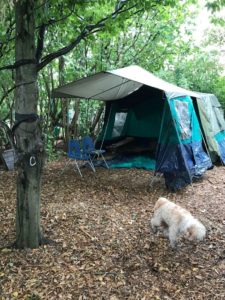 We’ve moved the spare frame we had in the old AS area up to our new base, and used it to extend the covered over area by the fire pit. We used a tarpaulin and some canvas scraps to try and give us increased cover and protection: we needed to improvise with a bucket (see if you can spot why and how in the photograph).

Yay, we’re so excited by this. We used the old tiles from the fire pit to create a base for a new stove and chimney, which will mean:

We have more DIY planned going forwards, as well as developing the wider space that we have to work with – but that will be the job of the DofE group as this is their volunteering project.