Adventure School gets a make over

All hands to the pump (or to the nettles in reality)

Ever since a neighbour backing onto the school expressed a lack of enthusiasm towards our outdoor endeavours  – I think the sound of happy and enthusiastic students got a bit too much for him – we started considering our options and eventually we decided to move our Adventure School HQ a number metres along our boundary fence.

Now, this wouldn’t have been such a big deal if it hadn’t been for the fact that the 100m we had to move was home to: nettles, brambles and years of uncontrolled natural growth (no, I’m not talking about Andrew’s beard here).

But rather than seeing this as a problem, we saw this as an opportunity to get the students practically immersed in a hands-on get-stuck-in project that would benefit them and the school in general (for years to come). We set to work removing branches, sticks, nettles, brambles and much more and using freshly cut (and kindly donated) tree chippings.

The result: a safe and usable area… check out the last photo below.

The job isn’t finished though (we have big ideas), but as you can see, things are looking a lot better and we’re back to normal with the bushcraft and outdoor hands-on activities which we all enjoy. There’s even a hammock or two for those that just need to lay back, look at the canopy and chill.

Thank you from Adventure School

Well, our first term of Adventure School is all but complete and what a term we’ve had! Things have gone really well, in general, and the students have all participated well and got lots of enjoyed from the activities we’ve completed and their time in the outdoors.

Some of the activities they’ve participated in include:

Oh, and lots and lots of clearing and preparation work as we expand the Adventure School area for future adventures in the spring.

So , the students and staff are really looking forward the forthcoming term but before we close for the end of 2017 we have to say a few big thank yous; firstly to Go Outdoors for the tent they kindly donated to us to enable us to keep Adventure School open during the Winter.

And another big thank you also goes to Dickies for the hard wearing clothing that they kindly sent us; I think all of the students and staff have at some point worn a gilet, softshell jacket, or a pair of Dickies gloves!

Adventure School Sleep Out for the Homeless

There has been quite a lot going on in Adventure School over the last week or so as we work hard to carry on clearing brambles, dead wood and general mess from the area we are hoping to move into over the next few weeks.

But one special event worthy of a mention was our ‘sleep out’ event which took place last Thursday.

The Big Sleep Out

Each year Framework (a housing charity looking to raise money for local homeless and vulnerable people) holds a Big Sleep Out event which gives people the chance to give up their warm beds for the night and sleep outside and be encouraged to reflect on what it is like for homeless people to sleep rough each night – and at the same time, raising money for the Framework charity.

As quite a few of the Adventure School Students had asked to camp out this term, we thought a Derrymount Big Sleep Out was the perfect solution. So, here was the plan:

The best way to describe how things went, is through a few photographs:

It was  a very chilly night, and very little in the way of sleeping actually took place. Why? Well, it’s hard to say which factor was responsible for keeping everyone awake: the cold autumnal temperature, or Mr Tuckwood’s very loud snoring! Hmmm, there may be strong views on this. To be fair though, anyone disgruntled with Mr T’s snoring was probably being so out of envy of the fact he actually got some sleep more than anything else.

But more seriously, one thing that is clear from this experience is that everyone (students and staff) managed to see the night out and in doing so had a lot of fun and food for thought for the lives and conditions that other people have to endure.

When the morning came and everyone headed inside school for a nice cooked breakfast, Mr Tuckwood and I had the unenviable task of breaking camp and getting tidied up (before a full day’s teaching ahead).

But as we took the camp down we were thankful that all of the students had managed to stick it out for the night and in doing so, raised a fair bit of cash for Framework.

We were also grateful that the new Adventure School ‘uniforms’ Mr Tuckwood and I wore  – kindly provided by Dickies – had kept us nice and warm. OK, so we may get teased a bit from the students for looking a bit like Arnie and Danny DeVito (in the film Twins), but we love our work trousers, softshell jackets and gilets – maybe one day all of our Adventure School students will look equally well dressed.

Comments from the students about the Big Sleep Out experience:

Outside it was pretty damn cold, so I was in me sleeping bag for most of it. When I actually went to bed, MY GOD, my back was stinging, so of course I got back up and went to the fire to chop some wood. Later I went to sit in my sleeping bag, then accidentally fell asleep. Long story short: It was cold and hurt a lot. It made me realise that homeless people are in a much worse condition than I am, so I’m pretty thankful for not being them. I joined on a whim, having no reason to join, other than just feeling like it. I was sort of glad that I joined it, despite the back pain I experienced the next day.

At the end of the night my eyes felt like I came back from a war zone, and my face felt like I just tore it away from the back of an active rocket booster. However, it was mostly fine due to the fact I was able to just sit around all night next to the fire and stuff my face with biscuits and other sweets, but yet, I went home smelling like ash and smoke

The was fire hot and my goggles were not that useful in what i got them for. I got them for protecting my eyes from the smoke but it did not keep all the smoke out.

For more information on Dickies work gear, see their website

Battling through the undergrowth

Adventure School is going from strength to strength – it’s really popular with the students and staff, and we are always looking to see how we can improve it and make it better.

So, for the first session this week we put some time (and effort) into expanding the workable area we currently have. You see, in the long term we have plans have a main hub, a shelter building and camping area, as well as soft archery ranges, a slackline area, as well as permanent shelter / classroom and a designated all-year-round hammock area.

All of the students worked really hard, awing, cutting and removing dead wood and lots of brambles. We have a long way to go, but it was good progress. The students enjoyed some popcorn and s’mores around the camp fire later that morning as a ‘thank you’ treat.

Taking shelter from the Go Outdoors

The Derrymount Adventure School has been running for half a term so far and the students who chose this as one of the KS4 options have enjoyed a range of activities so far, including:

The students have also worked hard to help clear and expand the Adventure School area.

Despite the successes of our first half term running this new Adventure School option, Andrew and I (we conceived and run the Adventure option) had a slight worry in the back of our minds about how we might keep running when the weather turns against us. You see, whilst it might be our every wish to keep taking the young people outdoors for their dose of fresh air and ‘green time’ – a natural therapy we get from a connection to nature – we are aware of the practicalities and pragmatic issues that arise when the weather is wet and cold.

We had managed to put some tarps up before, but they were less than adequate as they kept pooling water and being ripped down by the weight of the water.

We had also begged some small canvas frame shelters and these gave us some protection over the elements over the fire pit area.

But providing a larger sheltered area was still our aim.

Go Outdoors to the rescue

You can imagine the relief and appreciation then when our local Go Outdoors store in Arnold supplied us with a large ‘reject’ tunnel that was destined for the scrap heap (or recycling, I hope). The saying ‘one man’s rubbish is another man’s treasure’ comes to mind as we now have a large sheltered space that will enable us to keep our Adventure School ‘outdoors’ through the winter and allow us to even sleep out over the winter – the students are so keen to try a winter survival camp when the weather turns cold; a real sign of just how much our students are enjoying and relishing their time outside doing something new. 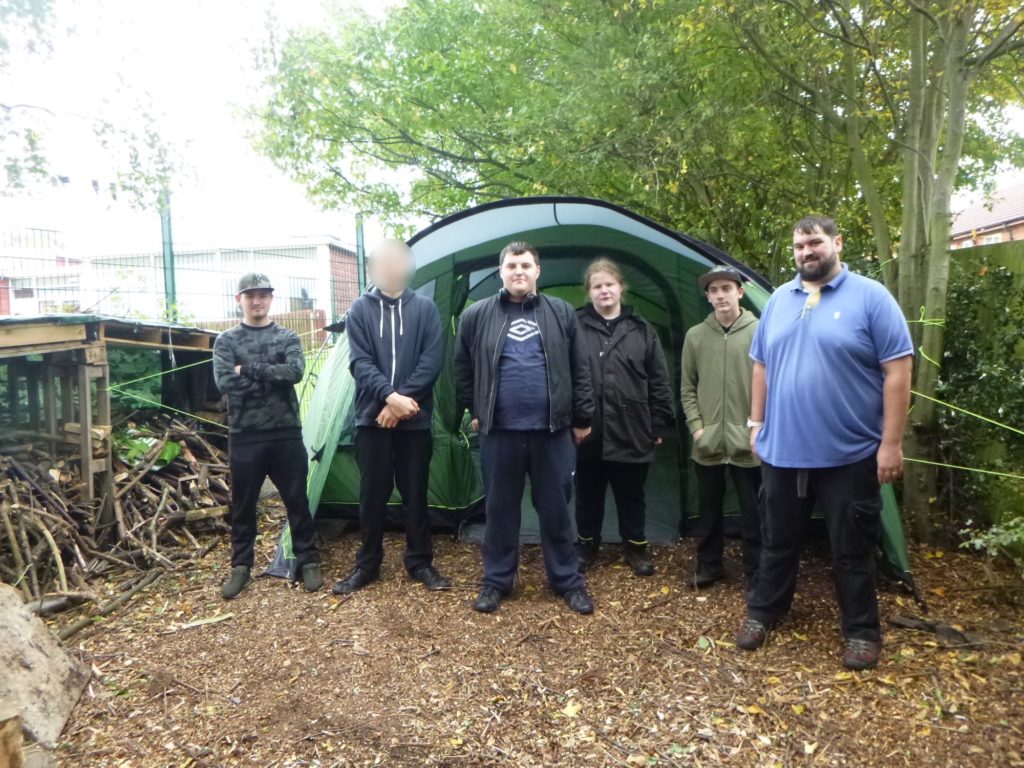 Roll on the DofE season – we plan to put our first groups through the Bronze Award – and plenty of more Adventure School opportunities.

Thanks to Go Outdoors, our students can all now ‘go outdoors’ whatever the weather.

This week in Adventure School were are learning about the different kinds of tents. The pros and cons, and when and where different types of tents might be used, from high end mountain tents to cheap, quick to pitch, festival tents, a specialist tree tent, to bigger family/group tents.